Well, RPoL games move slowly and this one is no exception. Nothing much to report, I'm sad to say. The "Gang" rested up, renewed their spells and set off into the unknown again. They traveled through the now deserted domains of the dead Tomb Spider, past two empty rooms, to discover a third empty room, with four sarcophagi and a mysterious mirror. 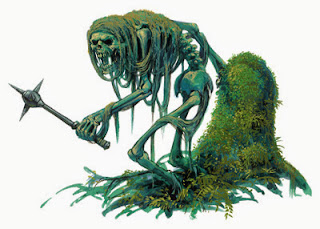 Leery now, they decided to back up to the mirror and throw something over it. No biggie, the mirror was nothing but trouble and of no value -- to them. Experience awarded accordingly. Then, after having ascertained which way the "bad guys" went, the self-declared "leader" bullied the others into a side jaunt and checking out another unexplored different room . . . thus walking right into the arms of a Huecuva . . .

(From 3.5's MM IV -- But I got this image out of the actual Module. Need to figure out how to make the "blank space" of this picture smaller)

The Cleric of Kord managed to Turn the Huecuva -- which now stands in a corner being pummeled by a silver axe -- but lacked the 'oomph' to Turn the Plague Walker as well, which -- in its turn -- is pummeling the Adventurers.

We'll see how it turns out.

A new Player has taken over the Whisper Gnome -- Flipplestick -- and I've allowed him to make some minor changes accordingly. Flip now has the Identify spell -- you will recall that the Group has two (2) Spell Casters, neither of which could cast Identify (go figure) -- and I granted him three Pearls, one hundred gold pieces (100gp) in value. Maybe now they'll be able to Identify at least a couple of the items they have and get themselves some much needed help.

Like I said, I'll keep you posted on developments. Meanwhile, time to post about some other things. I've "dawdled" long enough.
Posted by Mystic Scholar at 13:27 6 comments: